Tetris Effect: Connected is Out Now on Series X|S, Xbox One, Win10 PC and Game Pass 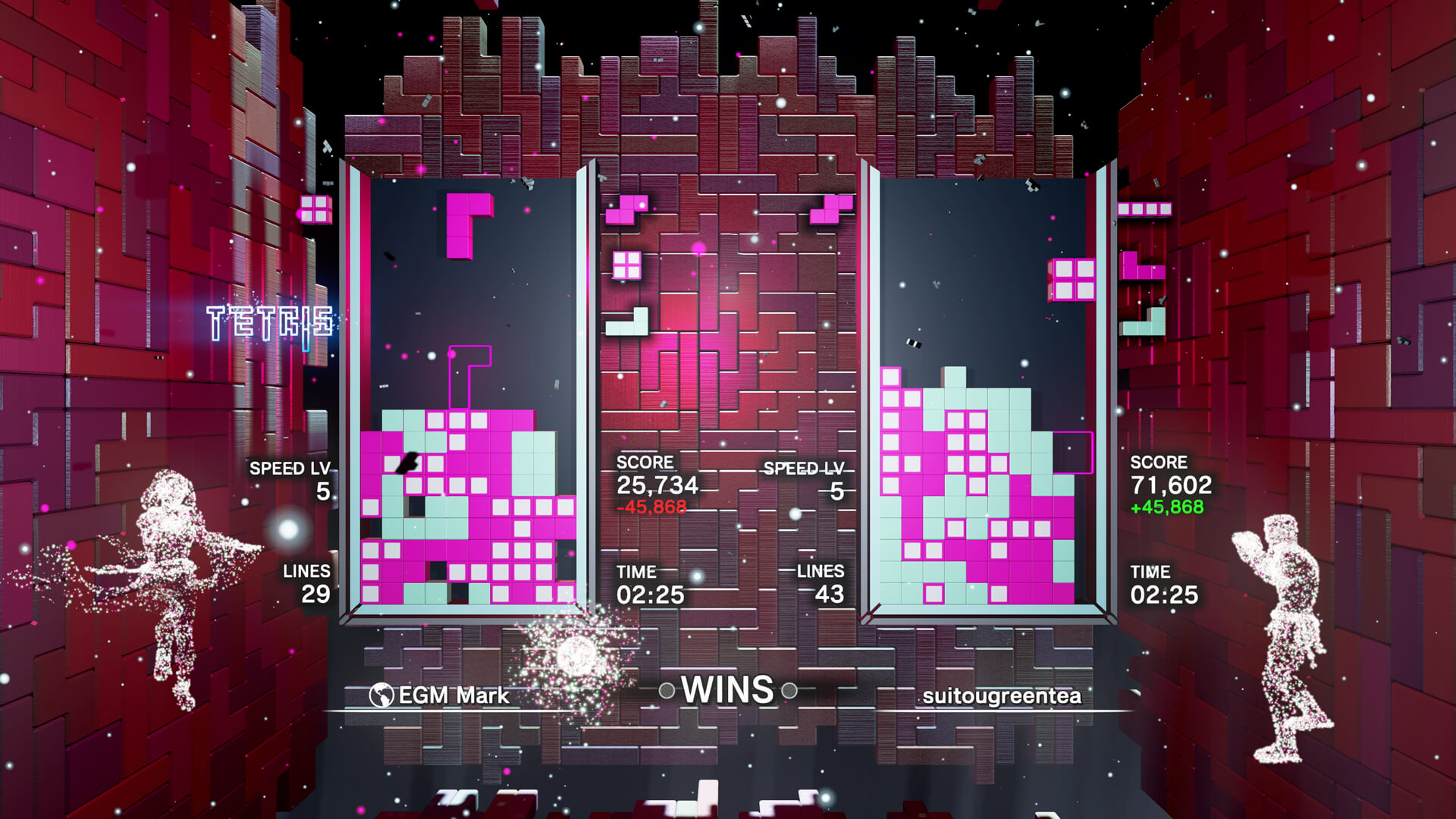 Later in Summer 2021, the multiplayer expansion will be made available as a free update to all other existing versions of Tetris Effect (PS4, PC on Epic Games Store, Oculus Quest).

Check out aGameScout’s explainer series on YouTube for more on the multiplayer modes and how they work (4 videos total).

MULTIPLAYER MODE SUMMARIES
Wherever they choose to play—on Xbox Series X, Xbox One, or Windows 10 PC, and either across the couch or across the world via Xbox Live—Xbox gamers can connect and play with or against each other in these all-new multiplayer modes (please see the in-game Multiplayer Tutorials for much more detail!):

CONNECTED
Form a three-player team to try and defeat A.I.-controlled Bosses.Connect your Matrices as you all enter the Zone and clear Lines together to deal massive damage. (A special variation of this mode, “Connected Vs.” allows a fourth player to control the boss character and fight against the team of three; this mode is only available for 24 hours every weekend during the “Full Moon,” which is the same timing as the Weekend Ritual in the single-player Effect Mode section.)

ZONE BATTLE
A one-on-one competition played with standard Tetris Effect rules, with the key to victory being adept use of the time-stopping Zone mechanic. This mode is a great way to test out the skills you’ve built up in single-player.

SCORE ATTACK
Another one-on-one competition played with standard Tetris Effect rules, only here no Line Attacks are exchanged. If your score is higher than your opponent’s when both games end, you win. We think of it as “single-player competitive Tetris.”

CLASSIC SCORE ATTACK
A one-on-one score-attack competition played using old-school Tetris rules, so no hard dropping, no ability to Hold a Tetrimino, only one piece shown in the Next Queue, pieces spin a bit differently, they Lock Down immediately when they touch a surface, etc. This unforgiving version of Tetris is what’s used for pro competitions such as the annual Classic Tetris World Championship.

MULTIPLAYER: TIERS AND SKILL RATING:
In Multiplayer, your TIER indicates your overall ability and experience level. Which Tier you fall into is based on an aggregate of your SKILL RATING (SR) in all the different modes, which increase when you win Ranked Matches, and decrease when you lose. (Your SR is also used to determine who you’re matched up against in those online Ranked Matches, of course.)

You’re also separately rewarded a little bit of SR each time you play, so get out there and grind!

The new multiplayer expansion joins the 10-plus single-player modes already included in the original Tetris Effect. This is Tetris like you’ve never seen it, or heard it, or felt it before—an incredibly addictive, unique, and breathtakingly gorgeous reinvention of one of the most popular puzzle games of all time, from the people who brought you the award-winning Rez Infinite and legendary puzzle game Lumines. Music, backgrounds, sounds, special effects—everything, down to the Tetriminos themselves, pulse, dance, shimmer, and explode in perfect sync with how you’re playing, making all of the game’s 30+ stages something you’ll want to experience over and over again.

Development is being handled by the same team of Monstars Inc. and Resonair as the original Tetris Effect, with additional coding and networking help from Tokyo-based Stage Games.